ArchivistaBox 2008/IX with the new Eiger and Cuneiform

Pfaffhausen, Switzerland, 29th August 2008: The first version of the ArchivistaBox 2008/IX has now been available at sourceforge.net for two days. The previous three months have been used intensively to trim the ArchivistaBox into even better shape.

ArchivistaBox Eiger 2008 with well over 100 images per minute

And yes, the new Eiger 2008 is even more compact than ever before. The new ArchivistaBox Eiger is about half as high as the previous box. The trend of reducing the size of ArchivistaBoxes has thus continued after the introduction of the ArchivistaBoxes Rigi and Säntis.

There are always new surprises. On of the most fantastic recent surprises for us was that there is now, finally, a good open source Text Recognition tool available that also perfectly supports some not so common languages. The sources for Cuneiform were published in April 2008 under the BSD licence. As a reminder: Cuneiform is amongst the top four text recognition programs available in the world. The commercial version was/is only available for Windows. After the sources were published in April 2008, a porting to Linux was quickly established at https://launchpad.net/cuneiform-linux, which provides new features on a daily basis. We at Archivista GmbH are proud to be able to accompany this development and integrate this OCR Engine into the ArchivistaBox. The development is progressing at full speed so it’s possible that within just a few weeks we may be packaging a considerably more further developed version of Cuneiform with the ArchivistaBox.

Tip: Virtualised solutions are available at all times in the Web Shop

When we began developing the ArchivistaBox well over four years ago, the now dominant trend of virtualisation was not yet foreseeable. This makes us even happier then to have developed a product such as the ArchivistaBox that can already be easily virtualised in its standard form. We know of installations made using Parallels, VMWare Player, VMWare Workstation, VMWare ESX-Server, VirtualBox, VServer and QEmu. Anyone who wishes to operate a virtualised ArchivistaBox can thus easily use one of the above mentioned solutions. Instead of hardware you receive as a customer a support credit for the implementation of the solution. With the installation it is advisable to make use of the new kernel (2.26.2). In fact, with the VMWare ESX-Server this is essential, just as with VMWare ESX-Server it is necessary to set SYSLOGIC as the IDE-device driver. 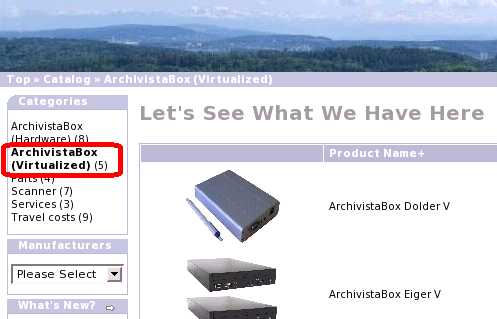 To order a virtualised ArchivistaBox, simply select the virtualised version. Our Web Shop can be found at shop.archivista.ch.