Pfaffhausen, 10 February, 2009: For almost five years our mantra has been that the ArchivistaBox is a completely web-based solution, and now all of a sudden we publish an ArchivistaDesktop. Have we lost all our senses?

But let me say two things already now: a) The ArchivistaBox remains as it is, i.e., it is undergoing and will continue to undergo significant further development; and b) wherever you are working right now, you are probably working on both a server and a client at the same time. Why? Because your computer most likely has so much capacity that it could easily replace an entire server along the way, and because you are also working on a screen — and thus with a desktop application — even if that application is only a web browser.

Why the differentiation between client and server?

To summarise in simple terms, it could be said that we work on the client, but save on the server. If we look at the ArchivistaBox, its primary role is to make documents available (DMS). But for capturing the documents in the first place, we need the same ArchivistaBox more as a client (e.g., for scanning). And, of course, many ArchivistaBoxes are used for both purposes.

Historical review of the ArchivistaDesktop

When our company was founded almost 11 years ago, the company consisted of three PCs — one server and two clients. A small computer acted as the server, first running a Novell and later a Suse server. Windows9x was installed on the clients. We soon discovered that the administration of these three PCs required a significant amount of effort. We therefore started to create copies of the clients’ hard drives. With these we could create a completely new setup at any time within approx. 20 to 30 minutes.

Later, we experimented for several years with various version of Linux and Windows versions. This resulted in the number of hard drive copies climbing into the triple-digit region. The handling became increasingly more difficult. In addition, in order to provide support we also had to ensure that we had all Windows versions in both German and English available, along with the various service packs.

To mitigate the unwieldy playback of hard drive files, we began to increasingly make use of virtualisation solutions in 2002/2003. At the time, the choice of solution was easy, to put it mildly: there was only VMware. So we created VMware images of all Windows versions and purchased the appropriate licenses for our desktops. But we continued to do installations manually, computer by computer, with at least several hours being spent on each computer. In short, this state of affairs didn’t exactly make us ecstatic.

What we wanted for ourselves was a solution that was primarily easy for us to administer. We were tired of setting up software manually, and we also recognized that we had to perform this job for our customers again and again — whether because a new server was being set up or because we published an updated version of our Archivista solution.

As we developed the ArchivistaBox, we ran various versions in-house on our own computers. For stability, we wanted a Linux solution, for the installation, we wanted a simple solution, which meant that Linux wasn?t so suitable at that time. In the end, a modified version of Slackware was created for our Desktop V1. We had a master computer (server), from which we could do the setup (incl. the desired IP addresses) directly on a client computer. For this, it was sufficient to insert a CD on the desktop computer, start it and then enter “install” in order to set up a completely new version of the desktop, incl. all applications. We still needed about 10 to 15 minutes for the whole process. 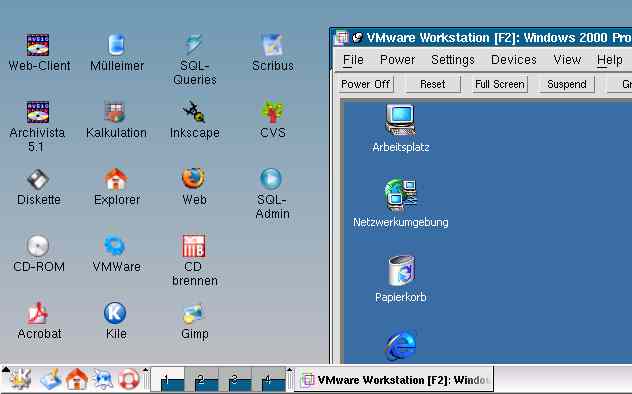 This ArchivistaDesktop consisted 100 percent of OpenSource components (except for VMware). And this Desktop was successfully used at our office until the beginning of 2009. We could successfully set up many new machines with an effort of approx. 1 hour per new generation of computers. However, the ArchivistaDesktop V1 had one disadvantage: to set up a solution, the computer had to be connected to the master computer. We successfully avoided this with the development of the ArchivistaBox, even though the path to that goal was sometimes (more) challenging.

Why was the ArchivistaDesktop 2009 developed?

No computer continues to work indefinitely. After about three to four years, it must be expected that the computer could “die” at some point. And because that’s true of a master computer as well (such as the one from which our computers were set up) we asked ourselves last year the question: how should we continue? We could, of course, have expanded the old desktop solution; on the other hand, we had come to increasingly appreciate working with the ArchivistaBox.

The new ArchivistaDesktop had to fulfil a multitude of requirements: we didn’t want to forego, for example, the old VMware files (with support for Windows). In addition, we needed both LaTeX and Scribus, as had been the case so far on the Desktop V1. And, finally, we also wanted to use the ArchivistaDesktop while on the move, i.e., it should be possible to surf securely and portably (while on the go). 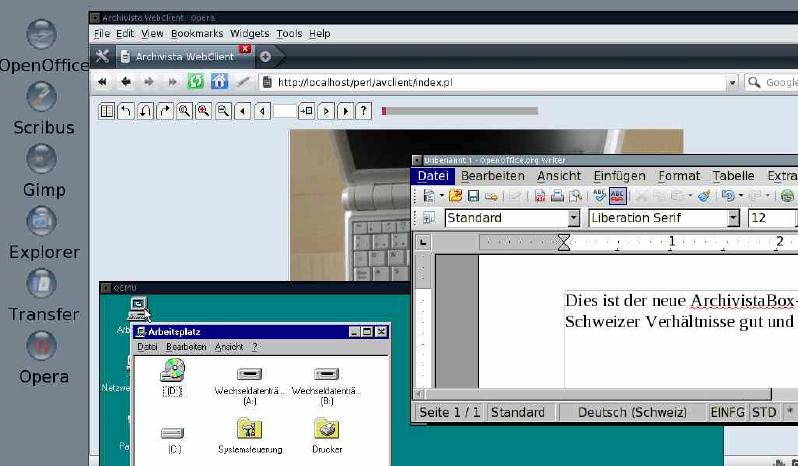 Documents can be created with OpenOffice, Scribus and LaTeX (Kile). This ensures that the entire suite of office applications available. We ourselves use OpenOffice primarily to convert office documents from other software manufacturers, advertising material is created and correspondence is handled with Scribus and we use LaTeX (Kile) for longer specialist articles, lectures and the handbook. If we want to/have to edit an image file, we usually like to make use of Gimp.

The ArchivistaDesktop also contains Opera, because it is only with this that Flash runs entirely without problems. Not that we are
extreme fans of this technology, but in the end we also use the ArchivistaDesktop for private activities, and most Swiss TV broadcasts can be watched beautifully using Flash. Three things should be mentioned in this respect: a) the current Firefox version sometimes crashes with Flash, and b) of course, the sound runs on the ArchivistaDesktop free of charge, and c) the sound is disabled on the regular ArchivistaBox. And yes, we are certainly happy to surf with a Sierra C885 modem using UMTS, for which the following settings are required in /etc/conf/network:

Small side note: it would be great if Swisscom would finally manage to correctly invoice my subscription. I have meanwhile received the third incorrect invoice, and would have happily paid more than 800 Swiss Francs too much if I hadn’t checked the invoice. And that with a subscription that can cost a maximum of approx. 50 Swiss Francs per month!

If the file “/etc/conf/network” has been created correctly, the modem can be started with “ifup ppp0 umts” (root terminal necessary). Every once in while there are still problems, i.e., two starts with “ifdown ppp0” and again “ifup ppp0 umts” are needed. And one other point: the ArchivistaDesktop is not secure, there is NO firewall on the box, but you can surf directly from the ArchivistaStick (which can be ordered in the store) without any problems. By the way, Java applications now also run on the ArchivistaDesktop because one of our suppliers wanted that capability for his store.

And now the question remains as to where the ArchivistaDesktop can be sourced. Make sure when downloading from sourceforge.net that you get the release with the ‘d’ at the end, e.g., archivista_20090216d.iso. You can also recognise such versions from the fact that the appropriate ISO file needs approx. 950MB. You can, of course, also acquire the ArchivistaDesktop by using online update. With this, you just have to add a ?d? in addition to the date stamp, e.g., ‘20090216d’ rather than just ‘20090216’.