A web-based virtualization server in just one minute with KVM

Pfaffhausen, 4 October 2010: we are particularly happy to present the first version of the new release 2.0d. Read on to find out why the new release is two times smaller and can be installed about seven times faster. In addition, the release contains the current kernel (2.6.35.7) and two instances can be operated at the same time. This is the first time that an update (as with the ArchivistaBox) has been implemented without overwriting the data (operating systems!).

More than 18 months ago, we brought out the first version of ArchivistaVM. The solution back then was based on Proxmox 1.3x. Accordingly, we changed the version number to 1.3a through 1.3e. During that time, we would have liked to implement a few additional features . However, this turned out to be much more demanding than we had initially assumed.

The kernel used by Proxmox was liberally patched, the integration of OpenVZ, KVM and an old splash booter required many interventions at the kernel, which, in turn, weren't/aren't necessarily forward compatible. The setup program was based on X11, GTK and Perl – and all that in a LiveCD environment, i.e. the installation CD contains both a live system with X11 and the installation packets (without X11). This requires a relatively large amount of space. Furthermore, unpacking the compressed CD takes a lot of time. We therefore decided to ship the LiveCD uncompressed. 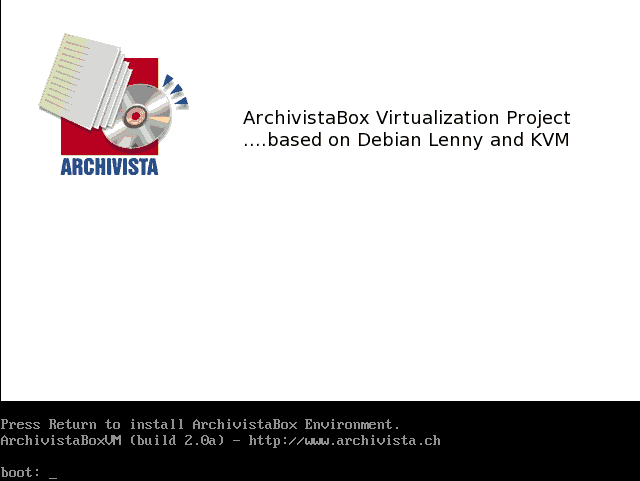 In the case of Proxmox, this means approx. 370 MB, or a little over 600 MB for our CD. One could get over the installation time itself of 15 to 20 minutes, but the fact that we could not really adjust the installer to our needs was much more problematic. Of course, we and our customers could save all the images during an update, then perform the installation using the CD, and subsequently reload the images. However, this process takes approx. 2 to 4 hours. No offence to consoles with ‘apt-get xyz’, but not everyone wants to perform an update at the console, even if the process itself isn't difficult.

In the event of an ‘accident’ during updating via the console, you must still factor in approx. 2 to 4 hours for the update. And since the server should run as much as possible without interruption, this means update work during off-hours (weekends). And that's not necessarily what I would wish for myself and/or our customers. I mention this here to show that the installer isn't just a minor detail and that a streamlined update process from the standstill offers much more security.

And one more thing bothered us. When installing Proxmox, an update mechanism is enabled (without asking!) that deploys news and updates to every instance. Others do this, as well, of course (e.g. Firefox), but a web browser is not an infrastructure solution for server virtualization, i.e. we did not necessarily deem this to be desirable for a virtualization solution.

New installer combines the best ideas from many Linux distributions

With the ArchivistaBox, we deliberately decided to enable two versions of the operating system to install at the same time. This allows us to always make the prior version available, as well as the current version. If there is a problem with an update, the last stable version can then be enabled at any time. During the update, data is not touched. A later upgrade can be performed by someone inexperienced without having to use the console. Re-deploying the system completely during the update has also proven to be valuable. This ensures that already compromised versions cannot cause problems during the update.

Complete installation in one minute from a USB stick

This resulted in an installer which requires approx. 1 MB of space. A complete installation can be performed in approx. one minute from the USB stick or in two minutes from CD (320 GB hard drive). Incidentally, in a virtualized environment (we had to run several hundred test runs) installation can be completed in approx. 30 seconds. Please note that this is not for starting the setup, but for the entire installation! Most of the time here, by the way, is taken up with formatting the hard drive. 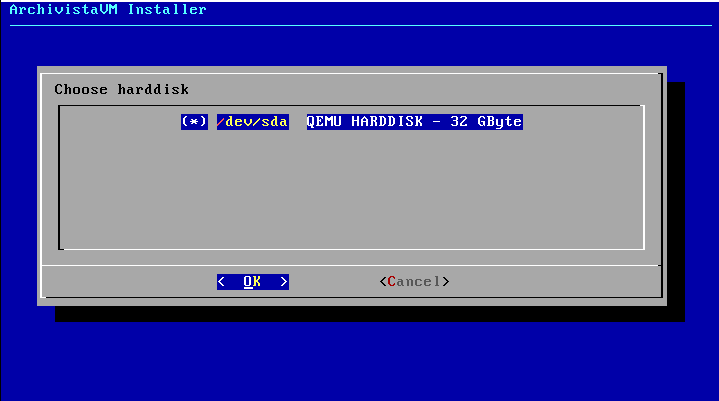 In addition, the installation program determines autonomously whether an ArchivistaVM installation already exists. If that is the case, the setup tests if a second instance also exists. In either case, the newer version is used for the update (IP addresses, VM instances) and the now older version continues to be available. If no instance exists, a complete installation is performed. In the process, network data is queried. A complete installation requires five Enter key confirmations and information regarding the desired IP address. An update requires the Enter key to be pressed four times.

We believe that an installation and/or update cannot be simpler and faster. You are very welcome to test version 2.0 extensively. You can download the ISO file here. The installation is described in detail here. One more thing: don't be alarmed if the download ends after approx. 300 MB. The new release really is less than a half of the size of the ArchivistaVM solution version 1.3x. Even though we are unable to publish a release date for the production version at this point, we don't believe that the production version will take an indeterminate amount of time to be published. If you would like to have the new release deployed when purchasing an ArchivistaVM solution, we will be happy to do so now.