Pfaffhausen, 17th June 2011: Time races on – and another month has already gone by. If you follow the blogs on our web page attentively, then you would have found the same title as that above at the same time in 2008. We are pleased to explain at this point why we are addressing this topic again three years later. 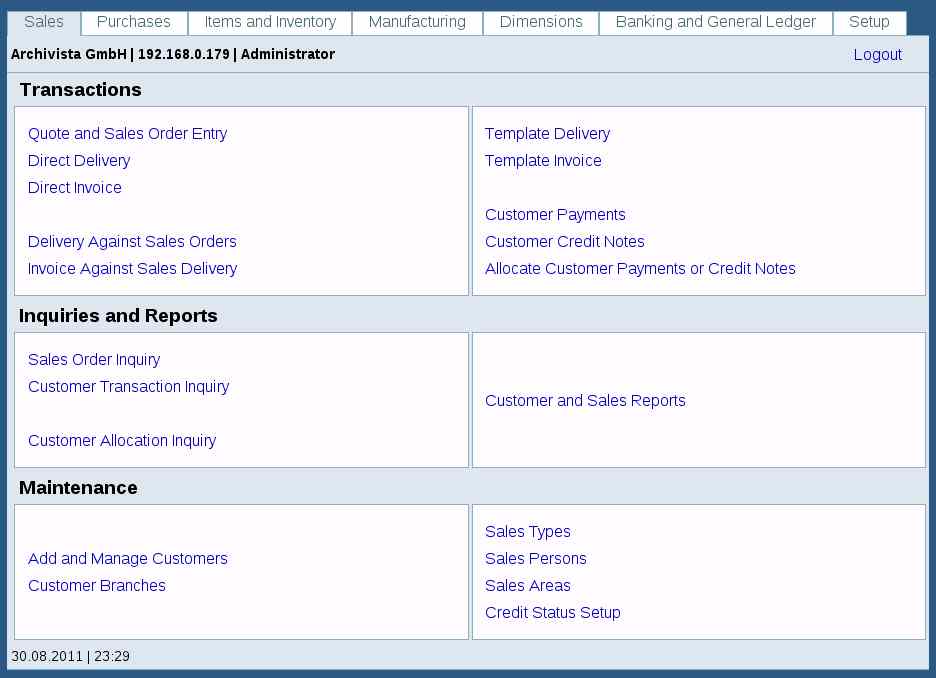 In 2008, we released both WebConfig and ArchivistaERP. You will find more about this in the blog at that time. And, if we present these two modules again today, this is because we needed a long time to continue their development. We were of the opinion that these modules merited a fresh look in 2011.

In the WebConfig module, there were problems with this application working with database support. It was also said that access was possible only if the database server was running. Meanwhile, we decoupled the Archivista WebConfig module from the database. This was in order to be able to continue working with WebConfig, for example while a backup was running. Operation on a slave computer is now possible as well; this was and is not possible with the former release. It is important to be aware that Archivista WebConfig runs only on the 64-bit version; we should also say at this point that anyone who is still working with 32-bit technology is welcome to migrate, with ease.

With ArchivistaERP in 15 minutes to the web-based ERP solution

Agreed, the title may sound somewhat pompous. Even more so, when we had already announced the availability of the ArchivistaERP module three years ago. Put simply – in 2009 it struck us that virtualization was the key and in 2010 we were fully occupied with migration to 64-bit technology. Naturally, we should have moved forward more quickly with further development of the ArchivistaERP module, but ultimately there were so many hurdles to clear before we could think of introducing ArchivistaERP in house.

Therefore, the ArchivistaERP module is the best example of the complexity of an ERP software. Even in a KMU undertaking such as ourselves, the complexity was far greater than was generally accepted. Interfaces had to be produced for the WebShop, the forms had to be adapted to Swiss and European usage and additionally, two different VAT systems make an ERP project much more complex than we or another company might like.

However, the ArchivistaERP is now available in a state where we can use it productively for our purposes. In the short term, this enhancement (this is also typical for any ERP migration) means a certain extra cost. However, at the end of this implementation phase, we will be able (after the summer holidays) to operate far more quickly than was/is the case hitherto. And should this lead to minor delays over this period, then you can be sure that we are working hard on the logistics and on ArchivistaERP. We ask for your understanding should there be any delays. 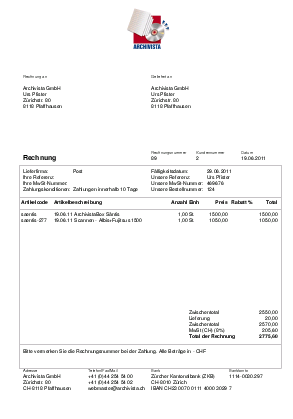 Forget the cloud and concentrate on OpenSource

In conclusion, I would like to state that we cannot recommend an undertaking (even if a familiar book for company founders views this differently) to operate invoicing or accounting in the cloud. Certainly, one or two providers, who offer exactly these services, do so heavily with OpenSource. It is correct that only the basic source code is disclosed.

Nonetheless, you as the end user will not receive an OpenSource solution, because the reports (printing templates) are not disclosed. What use is an OpenSource ERP solution if it does not include the printed reports with the code? How do you want to print out or dispatch the invoices, if you cannot produce invoices with the sources? Without the printed reports, you could simply access a commercial solution; you will then at least receive support or have a claim to be able to print out invoices at any time.

With ArchivistaERP, you receive the complete code and the printed reports are also covered by the same GPL licence; the manual can be called up freely. You can install ArchivistaERP on any Linux computer (even with Windows, it will run with XAMPP). And therefore you do not need Linux knowledge alone; you can refer to the fix-ready CDs and install on a test computer (you also need 2 GB and more and an Atom processor). Anyone who wants an even simpler package, should order ArchivistaBox at the Web-Shop, according to the motto – web-based yes, cloud no.