Pfaffhausen, 12 November 2011: For the fifth time in a row, we will be giving a presentation on our products at this year’s Linuxday.at in Dornbirn. This year we will present our SwissRocket cluster solution, which we have developed over the past few months while working on customer projects.

The presentation will introduce the Open Source-based solution Archivista SwissRocket, which can be used to set up a highly available virtualisation in 10 to 15 minutes. At the same time, we will introduce the components KVM, DRDB and ArchivistaVM. The presentation is divided into two parts. First, we will set up a cluster from the perspective of the user. This is followed in the second part by a look behind the scenes of the components. The presentation is rounded off with the experiences (positive as well as negative) we have gained from completed projects. This is all we can say with respect to the announced presentation, as we are currently in the process of preparing it. The following two examples, which we would like to present to you now (because they demonstrate rather well what can be done today with virtualisation), have emerged almost as a by-product.

95 Seconds and five nested instances: this is virtualisation on steroids! 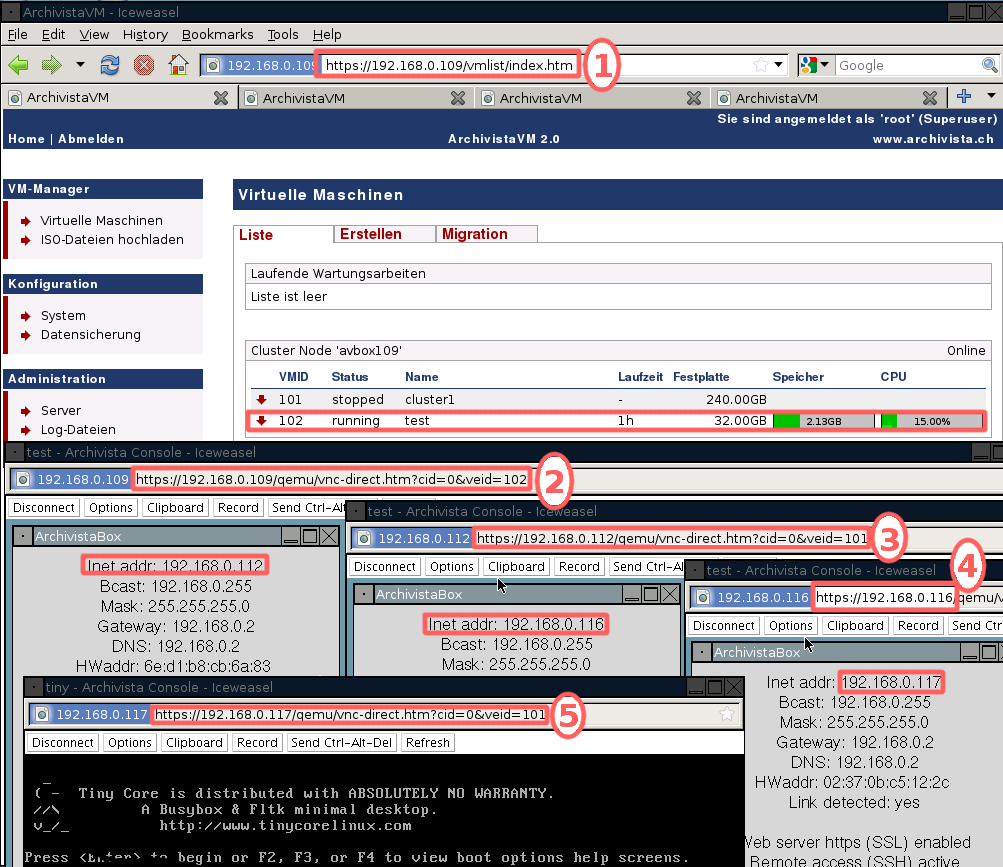 The second example asked how long it would take to set up an ArchivistaBox in which to set up another ArchivistaBox so that it can work. The Gif file runs in real time and the whole process takes about 95 seconds. For comparison: it takes approximately 5 to 6 minutes to set up an Ubuntu instance (first instance). Of course, another distribution could be installed in the second instance. It should be borne in mind that all parameters for the demo are set (e.g. IP address first instance 192.168.0.131, second instance 192.168.0.132)

We are sure you would agree that 95 Seconds to set up two nested ArchivistaBoxes is not a bad performance. After all, according to our boot screen there are “100 seconds to server infrastructure” – and only the first instance is meant here. While the first instance is operational after 20 seconds, the second nested instance needs about 1 minute. This is because nested instances need a comparatively long time during initialization (e.g. drive detection) but also because we gave the second instance “only” 2 GB RAM and one CPU. By contrast, the first instance has 6 GB and 4 CPUs. We will be showing these and other examples in our presentation and of course during the day at our stand at Linuxday.at. We used ArchivistaBox Universal in the above examples. ArchivistaBox Universal is a server infrastructure that is amazingly affordable and very powerful. We will also be presenting the Universal Box at Linuxday.at.