Egg, April 4, 2022: The development of the AVMultiPhone was suspended at the end of 2020. The underlying software was too unstable at the time. In the meantime, the community has done a great job. During a test a few days ago, it was found that many things with the PinePhone are currently stable. Reason enough to create and publish a new edition of the open source Archivista phone. 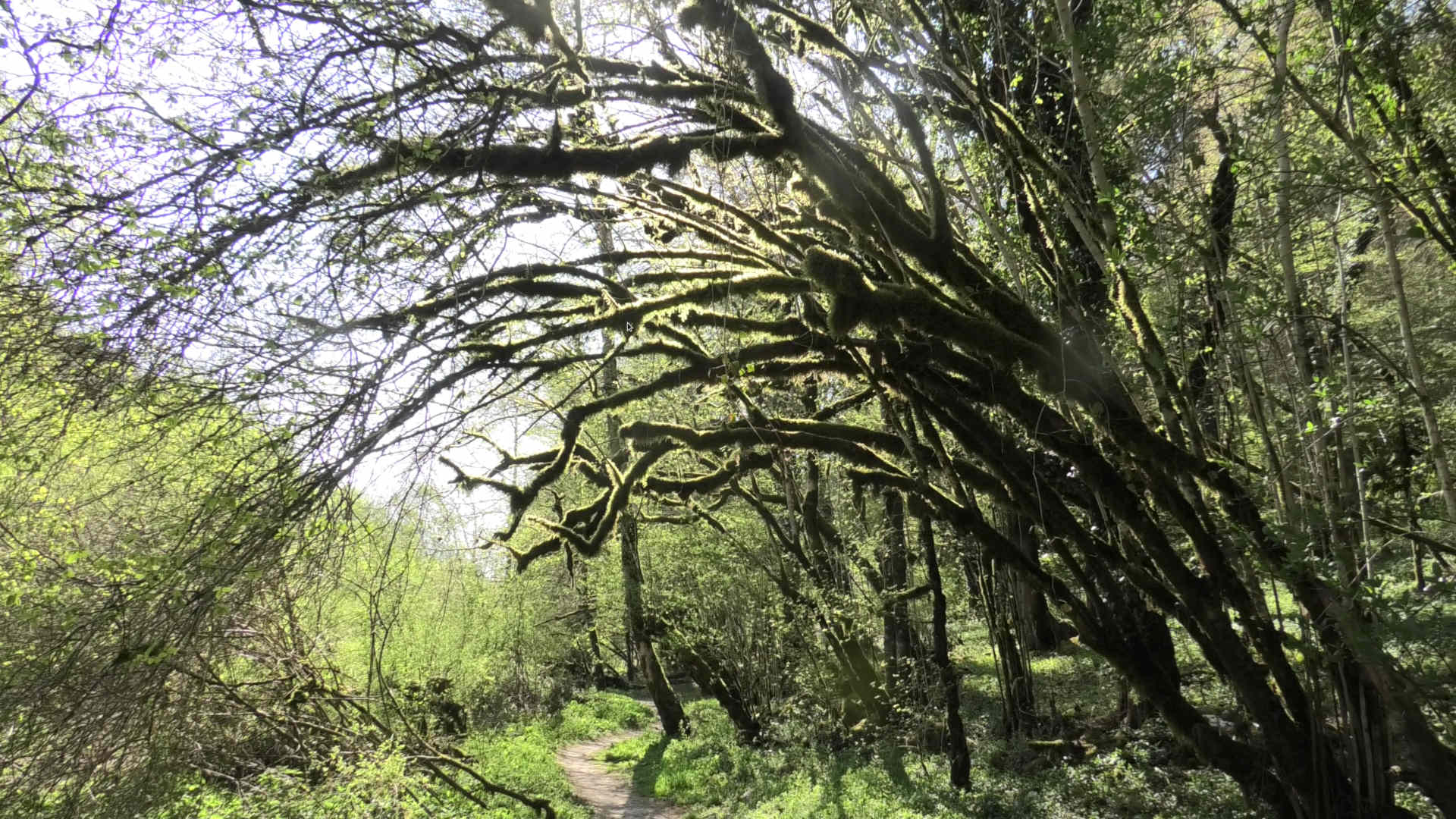 Smartphones and open source as a starting point

In the past few days (more on this in a later blog), the company’s “smartphone fleet” has been updated. If you want to work with an open source “Android” smartphone, you will face some hurdles even in 2022. After a few days of work (the job has been finished in the meantime), the idea came up spontaneously, if it wouldn’t be easier in the meantime after about 2 years with the PinePhone.

The reason for the “experiment” was primarily the fact that even after five years of experience with Android derivatives (e.foundation, Havoc or LineageOS) it still takes a lot of effort to equip corresponding smartphones. The selection of devices is still not abundant and furthermore, a list of devices does not mean that they will run. But as I said, there will be more information about this in separate blogs at a later time.

We tested Mobian, PostmarketOS Phosh, PostmarketOS Plasma and UBPorts in their current (stable) versions. It could be determined thereby, but there are many pleasing progresses. In particular with PostmarketOS Phosh a candidate is available in the meantime, with which one can already work quite handily.

A disadvantage with Phosh (which was already mentioned two years ago) is that the screen is zoomed up to 200%. This results in well readable icons and dialogs, but anyone who wants to start standard applications like LibreOffice will fail because of this.

PostmarketOS Phosh works quite well as a phone. It was possible to take halfway respectable photos (the camera with 5 MP isn’t that great). It was also possible to import our private music library with dozens of GBytes to Lollypop and listen to music comfortably. Phone and SMS work (incl. sleep mode or DeepSleep) stably. Thus, the phone “holds out” for a few days (with occasional use). Even GPS is available, even if the service is not activated at delivery.

On a positive note, PostmarketOS has a good installer that makes it relatively easy to reload a Pinephone. Software updates can also be installed directly on the phone. As a side note, PostmarketOS does not only support the PinePhone. In principle, all phones can be integrated where the bootloader can be unlocked. Currently, about two dozen devices are more or less well supported. Back to the PinePhone and the AVMultiPhone. That’s why there is AVMultiPhone V2

PostmarketOS Phosh already offers quite a lot of Linux comfort, but a “full-fledged” or “real” Linux desktop cannot be run with it. Phosh is too strongly inspired by the classic smartphone concept for that. And let’s not get it wrong, for the vast majority of users this should be the right way.

However, anyone who buys a PinePhone is likely to be connected to Linux in a narrower sense. And when I think back to the legendary Nokia N900 (with some nostalgia), there was much more Linux groove then than there is with Phosh.

Furthermore, Phosh German could not be activated with the on-board tools in PostmarketOS. Of course this impression is and remains subjective. All these were and are reasons why the development environment of PostmarketOS was “fired up” again for the AVMultiPhone.

Of course AVMultimedia is used for this purpose. And to make the process understandable, here is a short description how to set up the development environment on AVMultimedia correctly.

Specific to AVMultimedia is that pmboostrap must be “re-enabled” after each reboot. For this:

WLAN for the PostmarketOS “mate” derivative

Creating the image is easy. More difficult is, with Mate, to contact a WLAN. The menus and fonts are so small that it is factually impossible to work with PostmarketOS defaults. The easiest way is to create the WLAN settings (network manager) on another device (e.g. with PostmarketOS Phosh) and then copy them to the SD card. Created WLAN profiles are located under the following path:

Alternatively, you can open a terminal and enter ‘sudo su’. After that, the text-based WLAN configuration can be called with ‘nmtui’. After that the desired packages could be installed, which are useful for the PinePhone. Likewise the look would have to be adapted accordingly. And, and and…

Because let’s be honest, even as an experienced developer it takes days until a desktop is optimally adapted to a device from a standard delivery. Normal mortals will fail grandiosely. 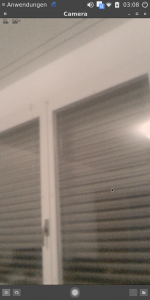 What the new AVMultiPhone V2 offers

In principle, AVMultiPhone V2 offers everything that was already available in the first version. AVMultiPhone is first and foremost a slim Linux desktop that can also be used to make phone calls. AVMultiPhone can be operated quite comfortably via the touch display. If you like, you can also work directly from another computer via USB or VNC.

New in version V2 is everything that did not want to work stable in 2020. Mention may be made of DeepSleep (sleep mode for a standby runtime of a few days), the camera (both main and front module, but currently only for photos), GPS (Gnome Maps is included), switching between English and German (select language on shutdown), audio (speakers and headphone jack). Music player (LollyPop).

It should not be noted without pride that currently movies or videos can also be played (especially in the web browser). However, it has to be noted that the WLAN throughput is not overwhelming. Movies in Full HD (or even 4K) usually fail because they cannot be transferred fast enough to the PinePhone.

As for the web browser, Firefox was “removed” at the last minute, since Falkon is a much slimmer and faster (and privacy-protecting) alternative. And unlike Firefox, you can navigate with your fingers in Falkon, which makes working much more comfortable. 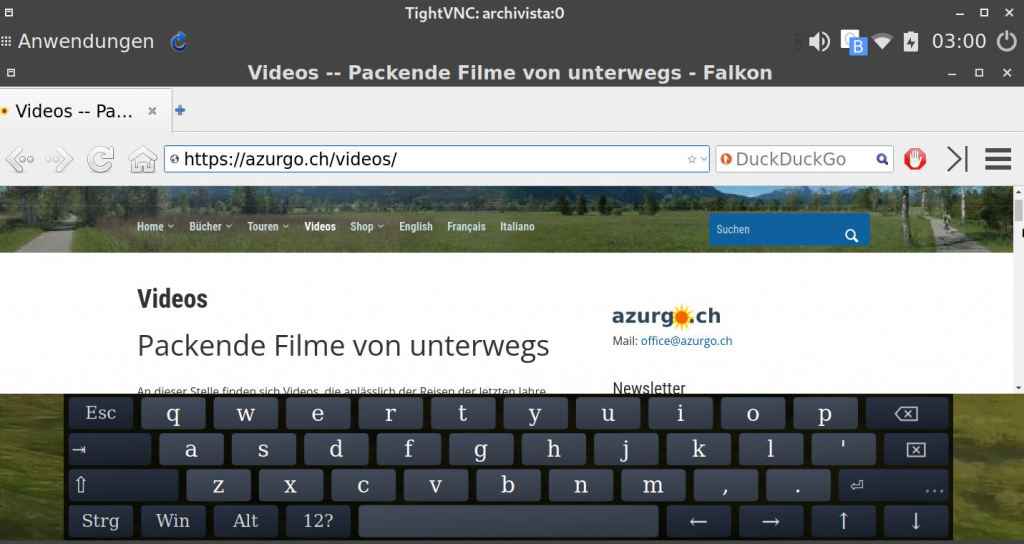 The current release (220403d) can be downloaded from osdn.net and from sourceforge.net. At this point we simply refer to the first version, the installation is well described there. In short it can be repeated. Obtain appropriate GZ file and record it with Etcher.io or on a Linux console to an SD card with a minimum of 8 GByte (better 16 GByte or more). Example:

Then insert the SD card into the Pinephone. Switch on the Pinephone. After approx. 15 seconds a numeric block appears to enter the device code (not SIM card code). The default setting of AVMultiPhone is ‘1234’. After that the desktop will be started.

Depending on the speed of the SD card, it may happen that the online keyboard (onboard) is activated too late to be able to unlock the SIM card directly, for example. In this case, it is sufficient to tap the blue-white icon in the panel. This icon can also be used to show or hide the keyboard at any time.

Note: To activate the WLAN card, tap the WLAN icon, then “move” your finger to the first line (disconnected) and “release” your finger. This makes it very easy to select the desired WLAN connection.

The applications can be found under ‘Applications’ if ‘German (Restart)’ was selected during the last shutdown. 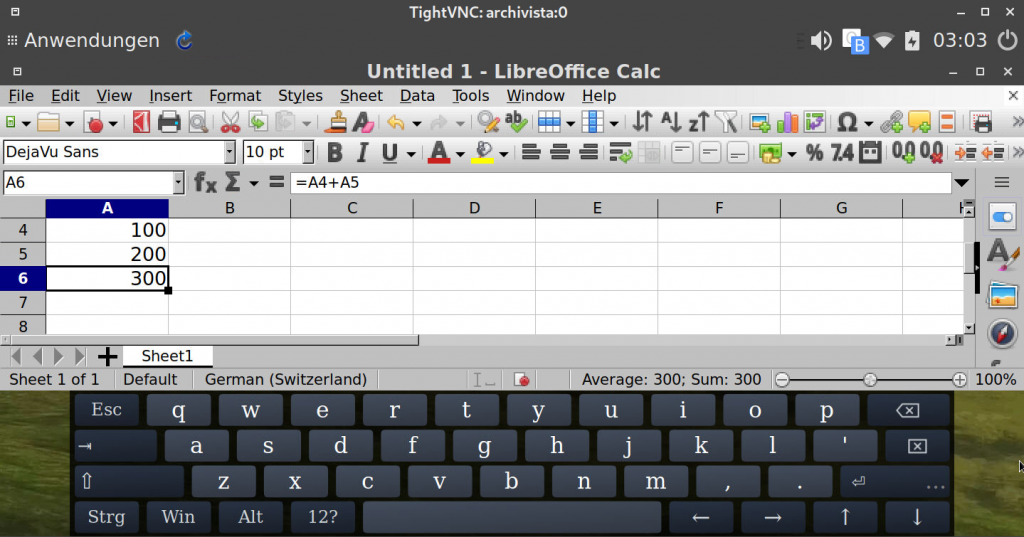 OpenSource also for the PinePhone modem

One of the biggest criticisms of the PinePhone was that there was no open source version for the modem (eg25). But in the meantime this hurdle has been “overcome”. The installation of the open source firmware is described here. We tested version 0.61. No problems could be found. According to the developer, the firmware is now able to deliver a text message in speech (text-to-speech).

The installation is not quite trivial and no mistakes should be made, otherwise the cover of the modem has to be removed to reset the firmware.

The AVMultiPhone V2 was not primarily developed to herald the triumph of Linux smartphones. Those who want a “standards-compliant” Linux smartphone will probably find it “easier” to work with PostmarketOS Phosh.

AVMultiPhone has been reactivated in order to have a fully-fledged Linux computer with you at all times when you are on the move (in your pocket), for example to do support tasks or simple office work without having to do without a smartphone.

Currently, there is a new approach with Waydroid that Android apps can also run on the Pinephone. However, in a test with both PostmarketOS Phosh and AVMultiPhone, we were unable to launch the Waydroid interface (waydroid show-full-ui).

In this sense (Android apps currently do not run satisfactorily), AVMultimedia is not a full-fledged replacement for an Android. However, if you are looking for a Linux desktop with telephony, SMS and Internet connection for your pocket, AVMultiPhone is probably the first and only choice. This is fitting with the entry in the PinePhone forum, where everyone actually advises against using a PinePhone, because it is too slow.

This may be countered, no with 2 GB RAM and a throughput of approx. 100 MByte on the data medium, the PinePhone can’t be too slow at all. In fact, non-optimized Linux desktops nowadays simply “guzzle” resources in such a way that all the beams crack. For this reason, AVMultiPhone V2 now finally offers what would have been desired as early as 2020.

The further development depends on the feedback of the users. If you like AVMultiPhone V2, you are welcome to buy the book ‘Zu Fuss vom Jura in den Tessin’ (with 99-minute video, 18 Swiss francs), a license of the ArchivistaBox (90 Swiss francs) or an AVMultimedia tablet (333 Swiss francs) with the note ‘AVMultiPHone’ on our partner website azurgo.ch. In each case 50% of the price goes earmarked into the development of AVMultiPhone.

If you just want to “donate”, you can find our account information here (note ‘AVMultiPhone’). If you want to have a specific feature programmed, please contact us directly, either by phone +41 44 350 05 60 or by mail at webmaster@archivista.ch. Donations in kind may also be made. Linus Torvalds’ book ‘Just For Fun’ is already on several bookshelves.