Server power at a workstation price

Egg, March 4, 2020: The new Ryzen CPUs, which bring unprecedented performance to the desktop, have been available for some time. As these processors are pushing the limits of performance, two new products have been created. Archivista K2 and Archivista Everest. In the following blog we will introduce the two flagships in detail. 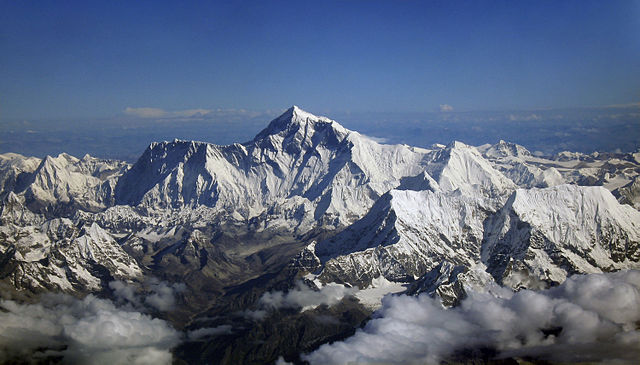 The boundary between server and desktop is obsolete

The new Ryzen CPUs offer performance previously only available in the server area. Already Archivista K2 (with Ryzen 3950X), where 16 CPUs or 32 threads are available, offers computing capacity that is currently not available from Intel. According to CPUbenchmark.net, the reference for CPU benchmarks (but measured with Windows, more about that later), it turns out that even the “cheap” AMD Ryzen 3950X CPU beats the currently fastest Intel CPU, although the representative of AMD is about 10 times cheaper. Or to put it another way, with Archivista K2 there is a performance for the entire computer (incl. 128 GB RAM, 2TB NVME, 2×14 TB hard disks), where Intel would not even include the CPU in the purchase price.

The chart also shows impressively that the first seven places are currently occupied by AMD. In the top 15, Intel is currently represented with just four CPUs (in 8th, 9th, 11th and 13th place), all with prices that are lower by a factor of AMD. Now the Ryzen CPUs are being touted as desktop processors, although these CPUs have much more power than the Intel representatives in the server area. And that’s why server and desktop CPUs can no longer be separated.

Whereby, this should be added here, the hit list CPUbenchmark.net has a “blemish”, the benchmark program works with Windows. If you are looking for current figures for Linux, you can find them at Phoronix.com. This homepage comes to the conclusion that e.g. the Ryzen 3990X processors offer an incredible Linux performance. All in all, the AMD Ryzen 3990X (installed in Archivista Everest) achieves around 20 percent more performance than a DualSocket system with 2 x Xeon Platinum 8280, at one fifth of the price of the significantly weaker CPUs from Intel.

The question remains, why at CPUbenchmark.net the Ryzen 3990X only achieves about 50 percent more performance than the much cheaper Ryzen 3950X? Currently, Windows (and unfortunately some Linux programs, more on this later) is not able to match the available performance of the Ryzen 3990X CPUs. This is because Windows is currently limited to 64 threads per application, but the Ryzen 3990X has 128 threads available. Although Windows can map 128 threads (or more), it cannot map them to a single application.

Under Linux, this limitation does not exist; each application can have the same number of threads as the Linux kernel. With the Archivista Linux kernel this is currently 512 CPUs/threads, which means that the 128 threads of the Ryzen 3990X can be easily assigned to an application. And therefore the measured performance of Phoronix.com, which shows about 300 percent more performance on the Ryzen 3990X, is correct (especially for Linux). 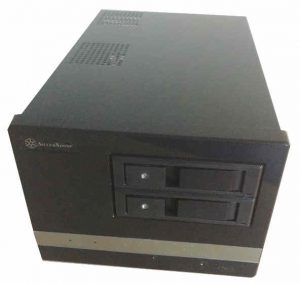 Archivista K2 is already being delivered with the extremely high-performance Ryzen 3950 CPU (16 CPU cores, 32 threads). Archivista K2 also includes a high-performance graphics card (Radeon X580 with 8 GB RAM or 2304 GPU cores). To be fair, it must be mentioned at this point that the 2304 GPU cores (mini-processors of the graphics card) of the CPU could be far out of reach.

Now, for example, the text recognition Tesseract 3.05 could be successfully translated with OpenCL (using the GPU cores), but the time gain was extremely marginal (< 1 percent). This is not to say that the performance could not be increased with suitable software (e.g. Blender 2.8x), but according to Blog.render.st even two NVidia K80 boards, each about 1000 USD expensive, “only” result in an increase of about 80 percent in rendering. This, by the way, with two Xeon E5-2670 v2 with 40 threads each. The 2 CPUs are altogether slower than a Ryzen 3950X (passmark value of 2×15026 compared to 35634),

Thus the performance gain should turn out to be significantly smaller again, apart from that the corresponding graphics cards cost a lot more than the processor built into Archivista K2. Furthermore, 2×300 watts (Tesla cards) compared to 1×105 watts (Ryzen 3950X) of power consumption simply don’t invite you to render with GPUs. Nevertheless, a good graphics card (e.g. when editing 4K movies) is useful, as the preview can be done almost in real time.

Back to Archivista K2 or to measuring OCR recognition with Tesseract. The Archivista manual according to the test environment Linux lecture from 2015 serves as a reference. The current measurement (tested with 820 pages each) showed an average performance of 14.6 pages per second. This results in a daily output of approximately 1.25 million pages per day. For comparison, with the then 48-core ARM cluster, approx. 0.25 million pages per day could be processed.

Archivista K2 also offers 4K rendering (cutting of films) under real time. Under real-time means: 1 minute of 4K material is rendered in approx. 50 seconds. For this to work, all 32 threads must be activated in Kdenlive. Archivista K2 is also ideally suited for virtualisation.

Thanks to 16 CPUs and 32 threads as well as 128 GByte RAM, a two-digit number of computers can be virtualised with ease (of course operating system independent of Windows and Linux). The corresponding ArchivitsaVM licence Budget Light is included in the basic price. The offer is rounded off by ArchivistaDMS PilatusV (up to 200,000 documents, licence for 1 year).

For all those who are more interested in the insides of Archivista K2, here are the key data of ArchivistaK2 at a glance: Ryzen 3950X with 128 GB RAM, Radeon X580 8GB with 2xHDMI, 2xDisplayPort, 1xDVI, 1×2 TB NVME disk (approx. 4 GB throughput per second), 2×14 TB hard disks (with or without Raid1), cooling CPU with special fan, weight: approx. 8 kg. completely assembled, ready for collection in Egg for sFr. 7990.– (incl. VAT).

Shortly after the completion of Archivista K2, AMD released the Ryzen 3990X, a CPU with 64 cores (128 threads) at the beginning of February. Apart from the fact that the Ryzen 3990X is currently the fastest CPU in the world, the question may be asked, who needs this level of performance on or under the desktop?

As mentioned earlier, desktop and server are merging more and more. Multimedia content, for example, is processed locally, but at the same time requires high resources (previously located in the server environment) for processing. Archivista Everest is ideal for all those for whom the performance of Archivista K2 is not enough. 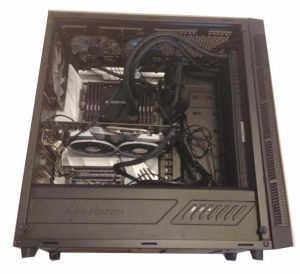 Unfortunately, Kdenlive is currently the most prominent “misnomer” in this respect. Rendering with 128 threads is only about 20 percent faster than with Archivista K2 with 32 threads. A glance at the processor load (console program top) shows that more than 3200 CPU percent are only rarely called up. As is well known, Kdenlive renders with the MLT framework. After all, in the last 2 months a performance increase of about 50 percent could be recorded.

So there is hope that the 128 threads can be used efficiently for rendering with Kdenlive in the near future. It should also be mentioned here that Ryzen 3990X has not even been on the market for 30 days, so a little (more) time for adjustments is necessary every now and then to get the most out of the hardware.

After all, thanks to our work around the OCR cluster in 2015, the performance in ArchivistaDMS can already be accessed via all 128 threads. In comparison to Archivista K2, the 820 pages of the manual template could be processed in under 20 seconds according to the Linux presentation 2015. This results in a performance of 41 coloured text pages per second (!). Projected per day Archivista Everest can process well over 3.5 million pages.

And yes, of course the Archivista OCR cluster or Archivista Everest is not tied to a computer, but can be expanded almost indefinitely.

The same situation arises with ArchivistaVM. Thanks to the internal NVME disks (PCIv4) a throughput of over 4 GBytes per second is available per disk. There are already two connections for these disks on the motherboard. There are also two additional card slots available, each of which could accommodate a further four discs. Alternatively and/or additively, 40 or 100 GBit network cards can also be installed.

Both Archivista K2 and Archivista Everest can be ordered from us immediately. If you would like to see the corresponding systems live in action, it is best to register for an OpenFriday. It is also planned to present the two computers (and perhaps some other ArchivistaBoxes) in a short video.

The basis of all our systems is the open source Linux distribution AVMultimedia, which can be freely obtained from osdn.net or sourceforge.net. Of course you can also build your own systems based on the Ryzen 3950X and 3990X.

At this point it should be mentioned that for Archivista K2 and Archivista Everest booting via NVME had to be implemented because NVME forms a separate category of media under Linux that was previously not supported by either the ArchivistaBoxes or AVMultimedia.

With yesterday’s release, this functionality is now fully available at AVMultimedia. Optionally NVME can also be used on our ArchivistaBox systems. The current release of all our solutions is based on the 5.4.22 kernel.