Egg, April 19, 2021: Apple’s new M1 devices have been available for a few months now. Many tests can be found on the web and the unrivaled speed of the M1 chip is emphasized everywhere. However, direct performance comparisons between Apple’s devices and Intel or AMD are hardly ever found. This will be made up for here by rendering 4K files with Apple’s M1 and AMD’s Ryzen processors. For starters, however, there is a short introduction to what should be considered when buying a Mac Mini M1 and, almost for dessert, it is shown how easily the ArchivistaBox works together with the Apple computers. 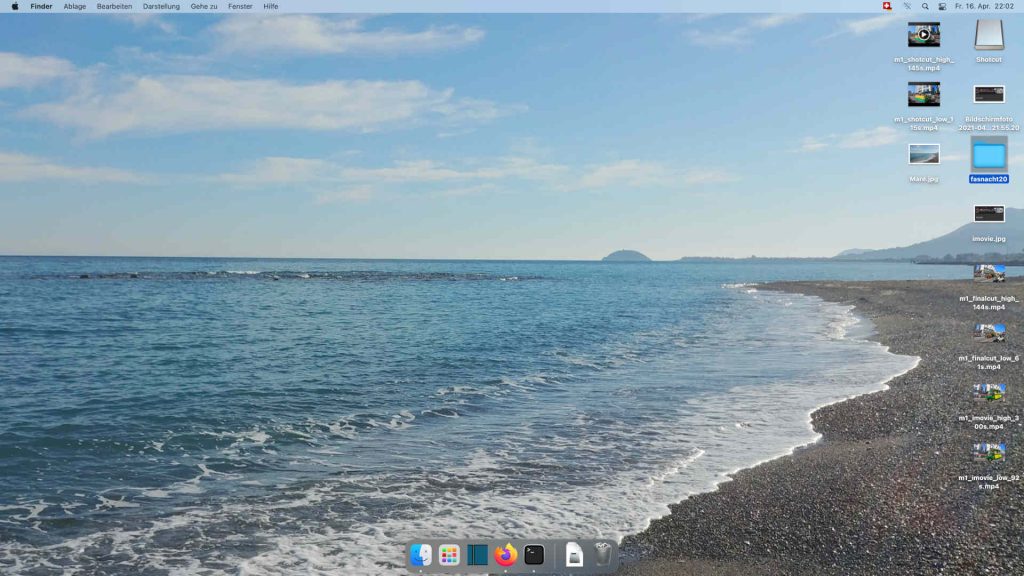 A few months ago, I wanted to transfer the contents of a USB stick from a Mac to AVMultimedia. Unfortunately, this did not succeed in short order. To retrofit the feature, a Mac Mini M1 was ordered from the wholesaler on the net for 690 francs (device with 8 GB main memory and a 256 GB SDD).

Those who enter the Apple world have to be aware that extras are not cheap. For example, the keyboard and mouse cost almost 200 francs (“08/15” set is available elsewhere for 20 francs!). At least common keyboards can be attached. Furthermore, the Mac Mini M1 only has two “normal” USB ports. Mouse, keyboard and USB stick can only be connected via a small passive USB hub. The new M1 devices cannot be expanded. The surcharge from 256 GB to 2 TB is steep, currently 880 francs in the Apple store. For comparison, a good 2 TB hard drive from Samsung does not cost a quarter. At least, in contrast to the iPhones, additional hard drives can be connected to the Mac Mini M1 via USB ports. The M1 currently only comes with 8 or 16 GB of RAM, the latter costing an extra 220 francs. Common 8 GB RAM bars currently cost about 30 to 40 francs. Consequently, expansions at Apple usually cost somewhere around a factor of 3 to 5 more than this is the case with standard hardware.

Setting up a data protection gauntlet

If you don’t have a Mac keyboard when you start the Mini M1 for the first time, you won’t be able to set it up without stumbling blocks, since you have to enter the Apple ID or a mail address. The @ sign can be retrieved either by activating the English keyboard or via the Windows key + G (if known).

If you don’t want to send your data to the manufacturer completely, you can click on the corresponding options in many forms to find out in the end that the cloud account will be set up anyway. However, anyone who has ever worked with a Linux computer will quickly find their way around the interface. However, some things are missing for longer work (e.g. multiple desktops, window handling, better terminal).

For the 4K render test, iMovie (free), FinalCutPro (trial version for 90 days, 300 francs afterwards) and Shotcut (free, open source) are to be used. The included iMovie can be started directly, but it only ran smoothly after an update via the AppStore (Apple ID required). Those who want to test FinalCut Pro must obtain it via https://www.apple.com/final-cut-pro/trial, in the AppStore there is only the ‘Buy’ button. Whether the price of 300 francs is justified, everyone must decide for themselves.

For those who only compile two or three snippets now and then, iMovie should be enough. It is easy to use, and so is the scope. Videos can be created in 4K, but no option could be found to set the number of frames per second. For example, it would not succeed in exporting recordings with 60 frames with 24, 25 or 30 frames.

Installing software via the AppStore is easy, but being tracked is unavoidable. Installing programs from third-party sources via the DNG format is not difficult in itself either. Downloading the file and then starting the installation with a click, but it had to be determined that there are a lot of queries without which the software cannot be installed or started. 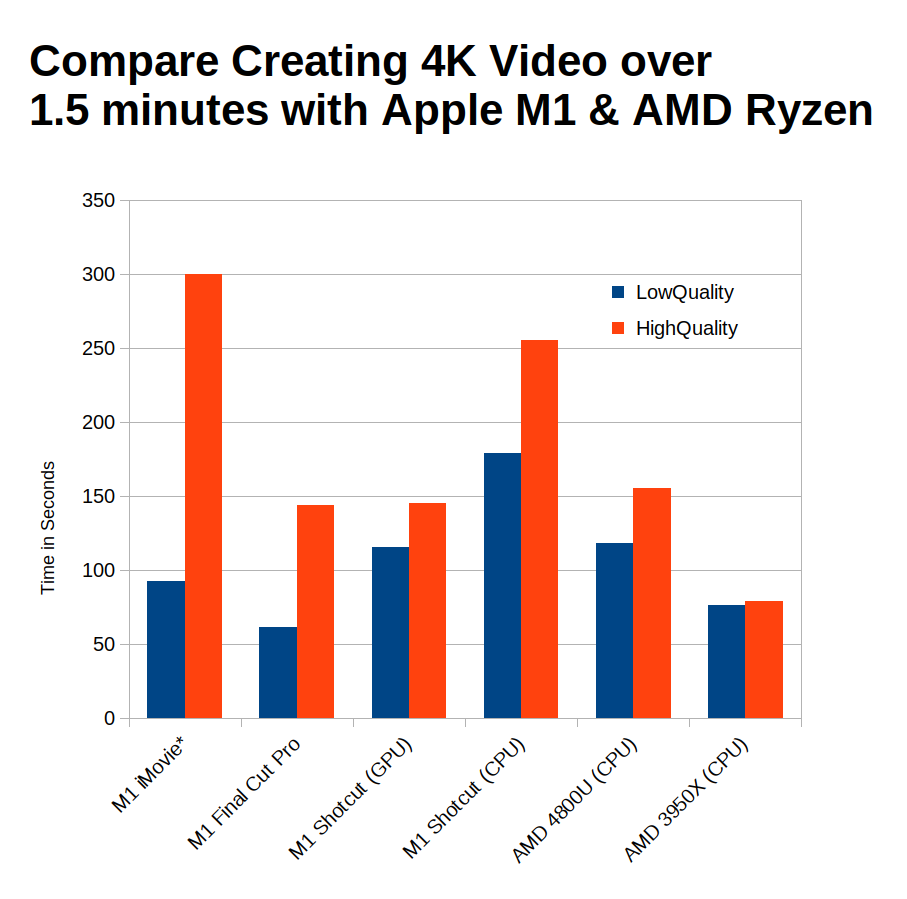 Ultimately, the comparison of Ryzen processors with a graphics card (GPU) would be unfair because up to several thousand francs would/could be invested here. Using a dedicated graphics card requires the installation of proprietary drivers under Linux; there is little left of open source and flexibility. Therefore, a dedicated graphics card was not used. Rendering is done with smaller (LowQuality, approx. 100 MB) and larger end files (HighQuality, approx. 500 MB) respectively.

iMovie: Fast and slow at the same time 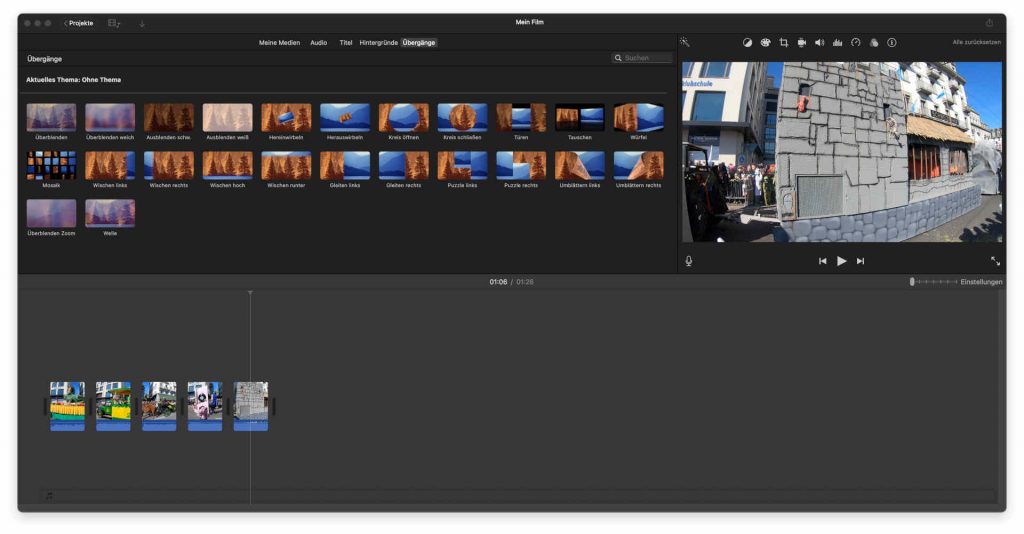 The times of 92 and 300 seconds make you sit up and take notice. On the one hand, the program works comparatively fast at low quality, but unspeakably slow at high quality. Perhaps this is due to the fact that iMovie only managed an export with 60 frames/second, while the target was 30 frames/second and the other candidates consequently only had to create half of the images. 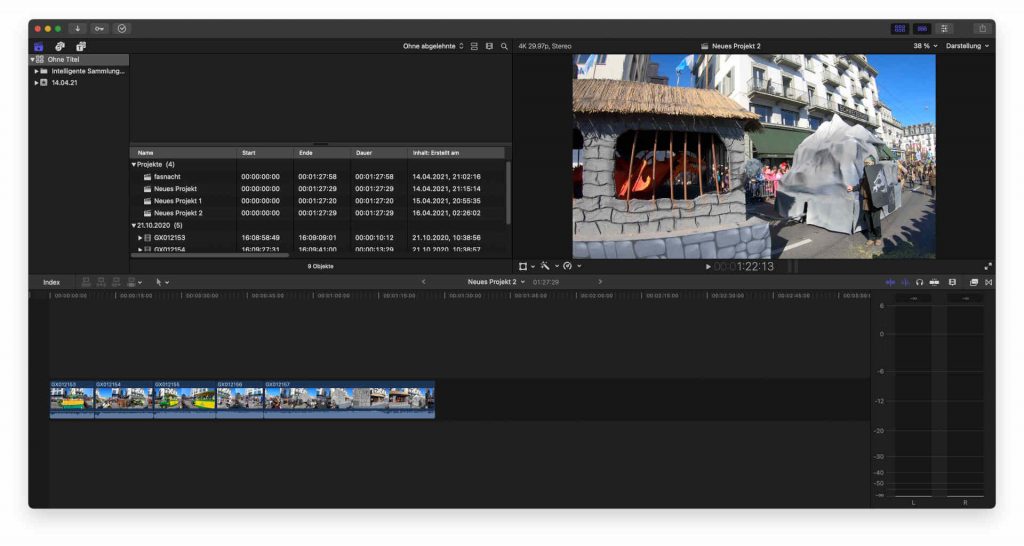 The Apple pro took 61 and 144 seconds. It can already be said that Final Cut Pro did the job fastest with the lower quality. However, it must be added that during playback (Test data and results available on request) a juddering can be noticed and the file, unlike the other candidates, is not about 100, but over 500 MB in size.

Final Cut Pro is even faster, by the way, when exporting in ProRes format. However, since currently almost always the MP4 format (H264) is used, this makes little sense. Ultimately, the export is about getting the definitive result, apart from which the ProRes files created are simply factors too large compared to MP4.

Shotcut with and without M1 graphics card 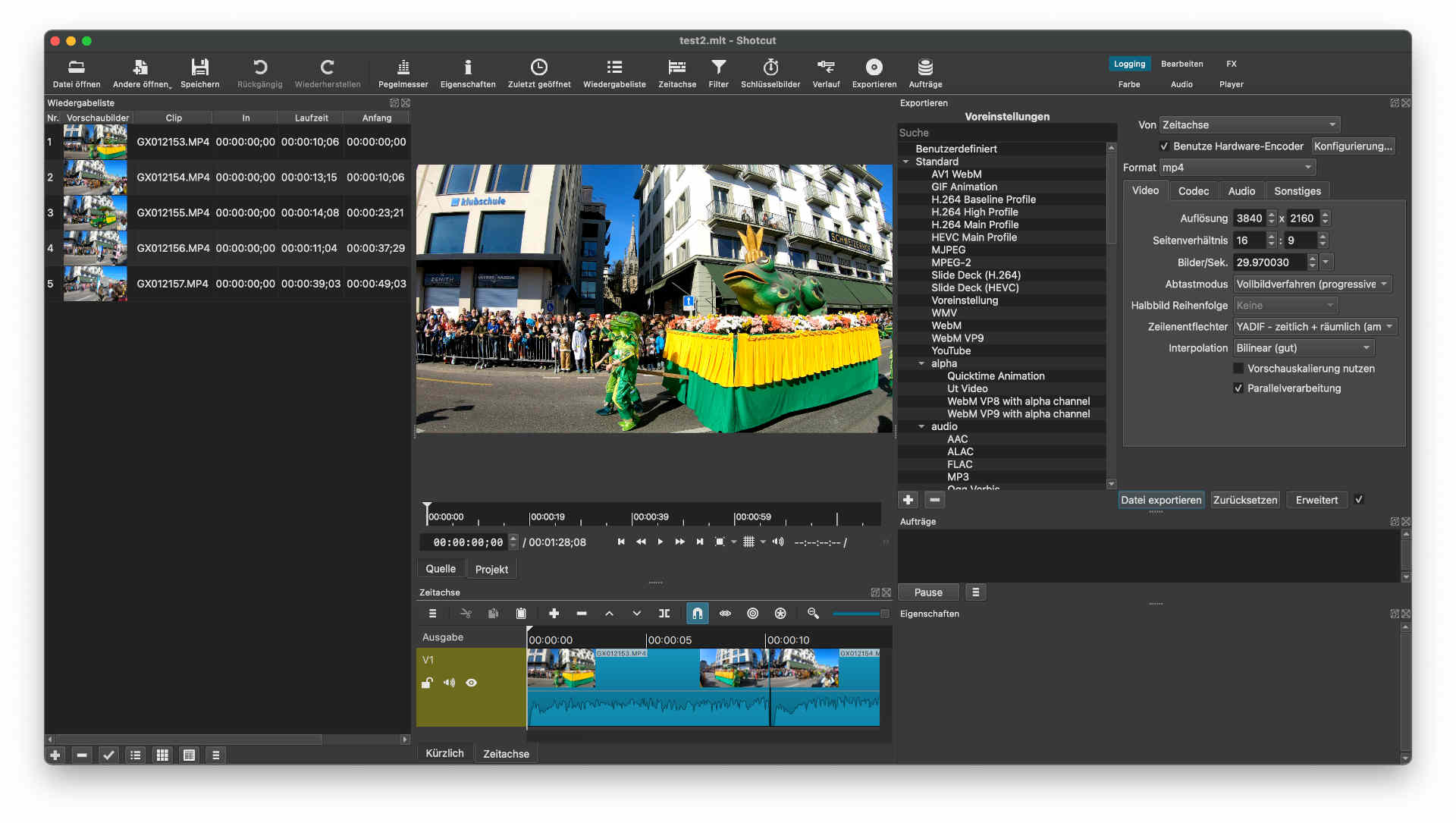 Using the graphics card, 115 and 145 seconds could be measured in Shotcut with the M1. Surprisingly, no difference to Final Cut Pro could be measured at the higher quality (145 to 144), but at the low quality Shotcut works almost half as slow as Final Cut Pro (115 to 61), but this seems to be at the expense of the quality as described above. The use of Shotcut on the M1 currently fails for a completely different reason: the preview scaling is not really fast yet. Both iMovie and Final Cut Pro have no weaknesses (as expected, because they come from Apple itself).

Shotcut with power on the mobile Ryzen 4800U

It has to be added that AMD’s fastest mobile CPU, the Ryzen 5800HS, currently already achieves 22,040 points, so the difference will be even higher when using a 5800HS. However, this increased AMD performance has its price in power consumption. The Mac Mini consumes 11 watts in idle, the Lenovo notebook (with screen!) also about 11 watts, and it is 6 watts when the lid is closed (without sleep mode). Under full load, on the other hand, the Ryzen 4800U needs a whopping 60 watts, the M1 needs only about 31 watts.

Of course, the duel of a CPU that comprises 16 cores or 32 threads with an 8 core isn’t quite fair, the M1 can’t keep up in comparison to AMD’s 3950X. Raster times of 76 seconds at low and 79 seconds at high quality incidentally show that the Ryzen 3950X is no longer fully utilized when rastering with Shotcut. This is ultimately due to the fact that ffmpeg is probably not yet optimized enough for the Ryzen 3950X to develop its full power.

The difference to the much cheaper 3900X is a few seconds, the time gain to the four times more expensive Ryzen 3990 (64 CPU cores or 128 threads) also only a few seconds. The rendering time of AMD’s flagship can probably be reduced to a third to a quarter by rasterizing single chunks in parallel, but this requires corresponding scripts. In corresponding tests, 1 minute of 4K could be rendered in about 10 to 15 seconds.

Currently, the M1 does not pose a serious threat to AMD in terms of performance, but it does to Intel. Nevertheless, the performance of the M1 is impressive. Being able to create 4K videos relatively smoothly with 30 watts is not nothing. If you like the Apple ecosystem, you have to decide for yourself. If you appreciate the advantages of open source, you will find much more performance for the same price with a modern Linux desktop (e.g. AVMultimedia). For those who have been using Apple for years, the M1 should be a good choice.

It remains to be seen if/when Apple can pack the M1 technology with significantly more performance. The M1X that is being passed around is said to include an additional four cores. Thus, it will by no means be able to knock the Ryzen models off their pedestals. However, if Apple managed to pack 16 or more CPU cores on one chip, it would be exciting. AMD/Intel would probably be forced to lower the prices. Competition is known to stimulate business. The years of high prices for processors should be off the table for a long time, the Intel monopoly is definitely gone.

A possible battle between AMD and Apple is not a disadvantage, neither for those who absolutely want an Apple device, nor for those who definitely do not want a “closed” Apple system. All benefit from the fact that there are currently three providers (Intel is only on the verge, not out of the window!). This keeps the market alive and creates great new products. 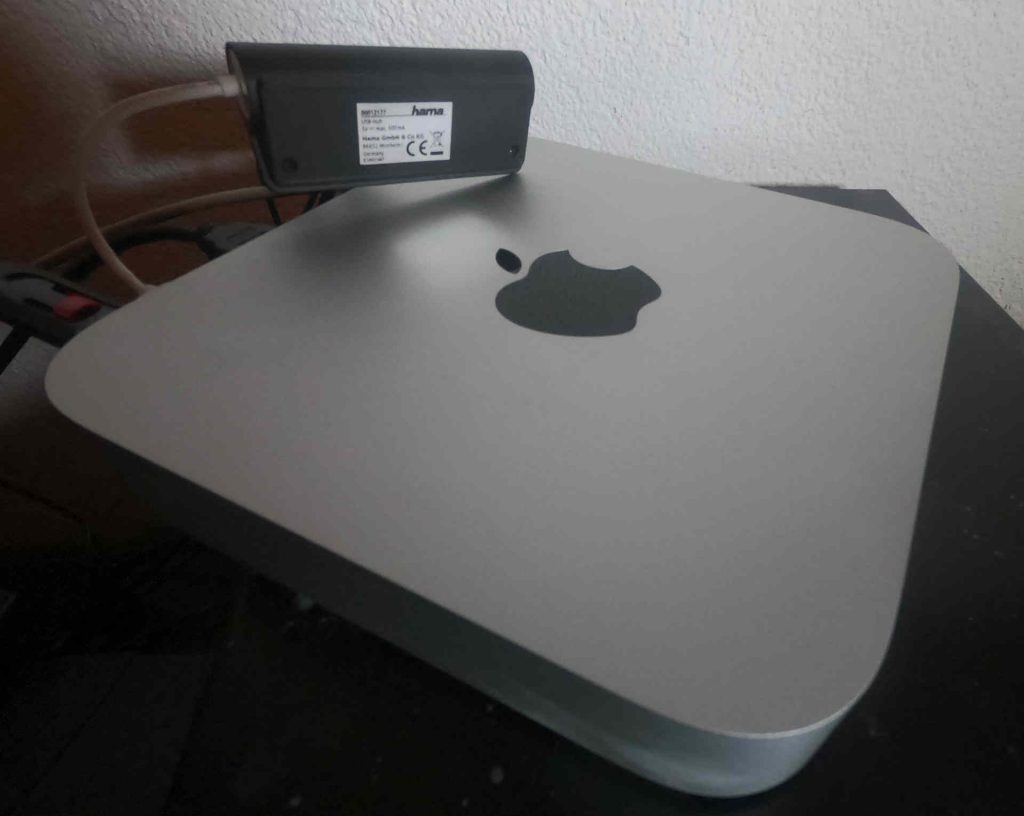 Apple M1 and the ArchivistaBox

This makes it easier to copy larger video files in particular to and from the ArchivistaBox. GParted can also be used to format data media for the Mac. In the opposite case, it may be that the data media can only be read, unless the HFS journal is deactivated. To do this, enter the following in the terminal on the Mac: sudo diskutil disableJournal /Volumes/Name (for Name, enter the volume name displayed on the desktop).

If it is a question of printing directly to the ArchivistaBox from a Mac, this has of course always been possible, but there were no corresponding instructions for the Mac. With ArchivistaBox 2021/IV you can find these at https://archivista.ch/e2/help and there enter ‘cups’ and ‘macos’.

Finally, it should be mentioned that those who get involved in the new M1 world have to be aware that programs that require an Intel processor “only” run via the Rosetta emulation. This usually works well, but not always. With OBS (program for recording screen sessions), for example, I could not create decent results. 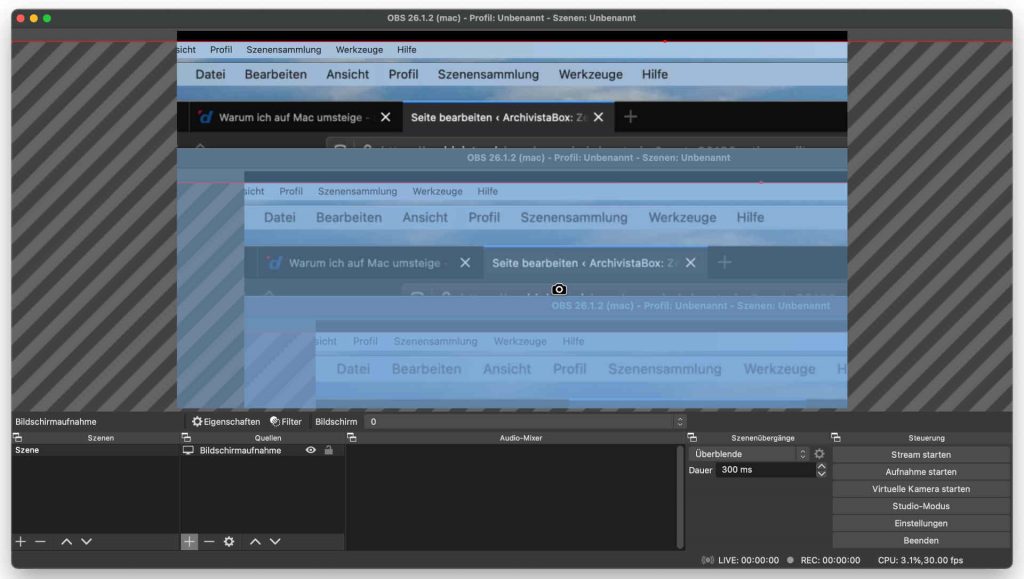 Therefore, it was not possible to create a video for the Mac Mini M1 with OBS. After all, the M1 is an ARM CPU, so there is simply no native virtualization for Intel/AMD available on the M1. According to feedback on this post, CrossOver should run quite well with Windows games. In my test with Parallels (version 16.5.0 50692), both a Windows 10 ISO file and the AVMultimedia ISO file (AMD64) stopped with the following message: Please use an ISO or VHDX image file with an ARM-based operating system.